Welcome to the story behind the art. 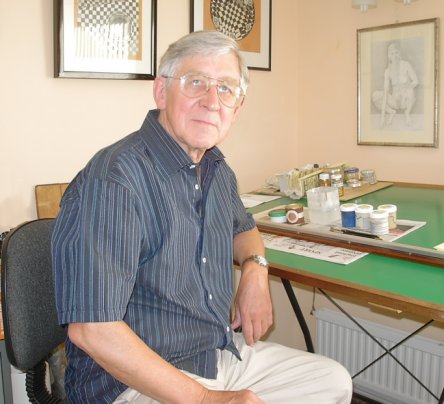 After completing National Service in 1949 I resumed my art studies, first at Reigate School of Art and subsequently at Goldsmiths College School of Art, where I opted to specialise in Sculpture.

On completion of my training I was confronted with the problem of making my living as a Sculptor and although I inevitably had to make compromises, on the whole, whatever employment I gained, whether it was model-making at Ford Motors, film-set construction at MGM or teaching in Art College I always managed to retain a direct connection with my chosen profession.

My earliest commissions, while I was still working at Dagenham, were for woodcarvings – decorative features for Ocean Liners such as the Southern Cross, Empress of Britain, Empress of Canada and Reina del Mar.

Later, having left Fords, I opted to go free-lance and was asked by the Church Commissioners to produce some stone-carvings as part of the restoration programme of the Chapter House of Southwell Minster in Nottingham. My next employment was as a clay modeller, later Modeller in Charge, at the MGM Studios in Borehamwood where I worked on such films as “Inn of the Sixth Happiness”, “Touch of Larceny” and “Gorgo”.

In the mid-1960s, in conjunction with the Cine Department at College, I embarked on an ambitious project of my own. In this Project, by means of a cine-camera, I intended to examine and explore a complex, kinetic sculpture, revealing its environmental details. Utilising my own range of skills together with insights gathered in the film studios I proposed to make a film which would enlarge upon these details and focus upon film sets of rich interiors populated by my own dramatis personae.

This Project juddered to a halt when changes at College and a crisis in my personal life caused it to be put on hold. My own crisis led me into counselling and an introduction to Jungian Psychology, which I recognised as a fruitful source of ideas. When my life got back to normal, the Cine aspects of the Project could not proceed, but I was able to continue with my film sets, the first one of which was a Library. I continued to think in terms of film sets and, becoming increasingly interested in the Jungian concept of the Archetypes of the Unconscious, I embarked on a long series of sculptures with imaginary figures representing aspects of these archetypal personalities in appropriate settings.

The subsequent pages of this web-site describe and illustrate these stages in my progress as a sculptor, although I must apologise for the lack of photographic evidence of some early work as much of my archive was destroyed when my studio was flooded in 1992.